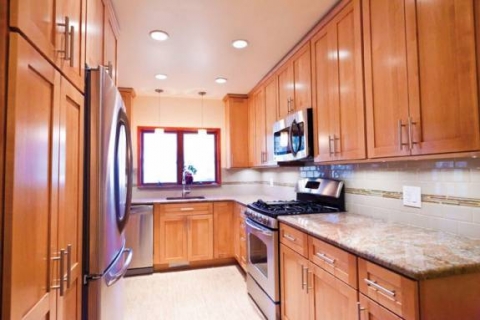 It’s a busy time of year for Renaissance Renovations.

As Mr. Haimovich spoke, Sergio Fancundo, his “number one contractor,” sawed pieces of wood, carefully measured the crown molding on dark maple cabinets and navigated around expensive appliances covered in thick cloth. He was working on a $60,000 kitchen and bathroom renovation on Netherland Avenue that, when completed, will feature an enlarged kitchen attached to a library, an island for dining, recessed lighting, Brazilian wood flooring and Italian porcelain tiles. It will also have upgraded electricity, two dishwashers, an LG refrigerator and Frigidaire appliances.

Before the renovation, which began about five weeks ago and will be completed this month, the kitchen was divided by a wall, which Mr. Haimovich knocked down to form the island. He also widened the dining room so it flowed seamlessly into the library, giving the whole area more light, and said he plans to install all-new appliances.

Mr. Haimovich currently has three projects in Riverdale, including maintenance and painting at the Conservative Synagogue Adath Israel of Riverdale.

He recently completed a $55,000 bathroom and kitchen renovation in Yonkers.

The project, which took two-and-a-half months to complete, features granite countertops, an island, a re-glazed bathtub, upgraded insulation and new porcelain flooring —  not to mention one very happy customer.

“I was so impressed, I can’t begin to tell you. I never had a renovation before because … I’ve only heard horror stories … I was impressed with David from the minute I met him and he was true to his word that he would always be there for me and help me through everything,” homeowner June Tu said. “There wasn’t one hiccup in the entire process. He was just incredible,” she said, calling the people who work for him “fantastic” at their jobs.

Ms. Tu tried to sell her house but couldn’t get the price she wanted for it. So she decided to stay and renovate instead.

Mr. Haimovich has served Riverdale for more than 10 years and has much love for his community. As such, it should come as no surprise that he strives to buy from nearby businesses. He purchases his tile from Express Tile in Yonkers and his wood from Lumber Liquidators, also located in Yonkers.

“We know most of the community. It’s a very close-knit community,” he said. “It’s like a small neighborhood.”

The original version of this article can be found at http://riverdalepress.com/stories/In-good-hands-Riverdales-remodeling-maven,50122.